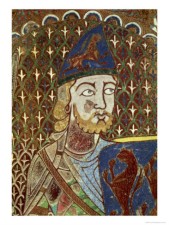 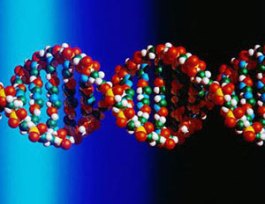 If you’ve clicked here from my Richard III Y-DNA article on Global Family Reunion’s blog, you’re welcome to skip ahead, just a little further down the page to where you see a picture of an artistic model of DNA on the left and a photo of an actual chromosome on the right.

If you’ve arriving from anywhere else: hey there! Thanks for clicking in. The following briefly explains what you’ll find.

This post is serving as a means to share additional details about the amazing discovery of the remains of England’s King Richard III (1452-1485) and the scientific study from the University of Leicester in the UK that announced this item of historical as well as genealogical interest to many around the world. I wrote an article about it which is living happily ever after on the blog of the Global Family Reunion, linked through the previous words.

The Global Family Reunion, if you haven’t yet heard about it, and didn’t just click on the link in the previous paragraph, is an event scheduled in Queens, New York City the 1st week of June this year (2015), aimed at drawing the attention of as many people as possible to the incontrovertible fact that all 7 billion of us human beings are literally related to each other. As such, it’s really the 1st

and family history are. It’s the effort, not of some nutty genealogy freak who’s been in the archives so long and just wants to waggle a finger at people showing off his own status, or pedigree, or anything like that. Nor is it some stuffy historian who wants to “teach the world” something. And that’s probably what makes it potentially actually appealing to lots and lots of people. GFR is the effort of humorous intellectual pop-writer A.J. Jacobs. Click here to read my rundown on how he got this idea. And do click on their site, too, to find out what’s going down at the event (Henry Louis Gates, Jr., host of the PBS family tree show “Finding Your Roots” will be a speaker; so will former US President Geo H.W. Bush; and the founder of FamilyTreeDNA…games for the kids…etc.) In addition, if this is your 1st time at this site, Roots2Now, you can browse or search around as there are lots of posts on my own family tree (Ireland, Italy, Campbells, Bilderbacks, new Swedes & older Swedes) as it merges with other people’s and historical convergences etc. Well-tracked & thus widely shared ancestors get more attention than others since they literally do represent the places where our paths connect with those of strangers…and sometimes people much closer!

So since the basic rundown is living happily at the GFR blog, I figured I’d use my page to share some of the more detailed aspects and charts that I hope help maintain clarity or bring some where it seems to get muddy.

For all this potential interest to historians and dynastic genealogists the findings on the Y-DNA might be engendering, that part of the skeleton’s genetics was not going to be able to help determine if the skeleton was Richard III or not. Another equally unique and highly

indeed skeleton=Richard III. And that bit–publicized a year ago–was the mT-DNA, or mitochondrial DNA, which, opposite from the Y-DNA, we all get from our mothers, and only mothers pass it to their  kids. Thus, it enables a view to people’s’ female-line ancestry. Like Y-DNA there are around 20-something kinds that anyone’s will fall into.

The goal, as with the Y-DNA, was to find relevant living relatives.

In this case, since Richard III had the mT-DNA of his mother, Cecily Neville (1415-1495), the idea was to follow the line of her daughter’s descendants, ie, of Richard’s big sister, Anne, Duchess of York (1439-1476), though, to be more specific, it would have to be only a line of continuous female to female descent to the present day, and if no such line existed, then they would have to investigate if Cecily had sisters who had daughters, or if her mother had sisters who had daughters, etc. I take the time to mention this because Anne (pictured to the left) in fact died giving birth to her only child who would live, which happened to be a girl. But that girl, Anne St. Leger (1476-1526, & pictured lower left) had lots of kids, including daughters-plural. One of them, Katherine Manners (1511-1550) also had a ton of babies, and yes, more than one girl who grew up to in turn then do more or less or the same.

And sure enough they traced down the lines and managed to track down two living people descended in the female line from Richard’s big sis Anne. It’s extremely worth pointing out, btw, that these two people–see to the right–are regular people, ie, not royalty, recently-aristrocratically-inclined or even at the “old money” part of the cycle by which most of royalty’s descendants end up not the least “royal”. I’m also descended from Anne of York through her daughter Anne and granddaughter Katherine Manners, but my DNA is totally irrelevant, since I’m descended from one of

her sons, not to mention multiple generations of male to female and back descents. But I digress!

Richard III’s mT-DNA and that of the living relatives DID match. The “uber”-grandma was a woman named Katherine de Roet Swynford (1350-1403). The details are culled from the study.